Writeup was one of the first boxes I did when I joined Hackthebox. It definitely helped to introduce me to basic web enum skills without relying on scripts, exploit finding and local privilege escalation. It had a very interesting path to root, which was tricky to spot but fun to exploit. Summary User - A vulnerability in an open-source content management system allows us to gather hashed credentials, which can be cracked using a wordlist.

Root - An MOTD script is run as root when the user account is logged into, which we can take control of.

We start off with a standard nmap scan. Normally I’d leave one running to scan all ports aggressively, but it wasn’t necessary in this case.

Upon visiting writeup.htb we are greeted with this page: 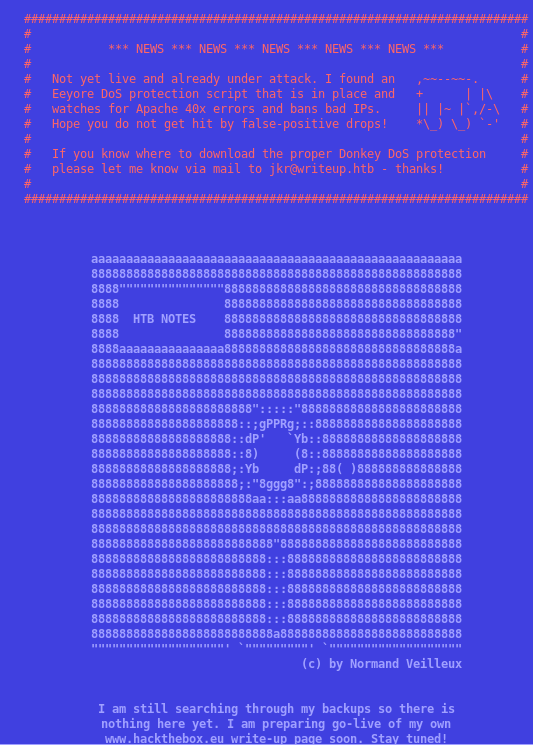 So we’ve got DDoS protection in play. If we produce too many 40x errors, we’ll get temporarily banned, which means no automated scanners. At this point, I guessed urls until I came across the fairly obvious /writeup/.

A quick read of the HTML finds this in the header: <meta name="Generator" content="CMS Made Simple - Copyright (C) 2004-2019. All rights reserved.">. At the time, I spotted this quicker because of a very useful Firefox extension Wappalyzer, which identifies many of the client and server-side technologies in use on many sites.

After a short search, I found this script, which exploits a SQL injection vulnerability in versions of CMSMS 2.2.9 and below.

This part was definitely tricky without being on the free servers. Luckily, I was at the time, and was able to take advantage of two things:

Every time jkr logs in over SSH, this command is run as root!

Let’s break this down:

Inside this directory, we find a single file, 10-uname, which simply runs:

This directory and all its contents are owned by root and not writable, so no luck there. Let’s look into the PATH that gets set, and see if we can hijack anything there. I quickly found I could write files to /usr/local/sbin/. Why’s this important? Here’s a diagram:

As uname’s absolute path is not specified, the system will iterate through the given path to find it, using the first instance it finds. I’ll demonstrate this with a quick POC:

Recently I’ve started making use of the SSH config file, to speed up logging in over SSH. Here’s what mine looked like for this box:

This allows me to do ssh writeup or ssh writeup-root. After uploading my public key to ~/.ssh/authorized_keys, this means I don’t even need to enter a password.

I’m always interested in seeing how box creators keep their machines stable for other players. While in /root, I noticed cleanup.pl, which looks like this:

This checks the age of all files in /usr/local/sbin (or /usr/local/bin) and deletes any older than 1 minute ( not 3 as advertised).